How Much Food Do We Waste? 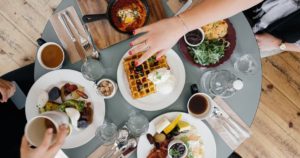 While it may seem crazy in our food-rich society, global hunger is still a significant problem. Almost 800 million people around the world go hungry on a regular basis, that’s 1 in 9 people who do not get the nutrition needed to lead healthy lives. The consequences of world hunger are widespread, severely devastating and beg the question, what can I do to help?

One of the major factors behind the global hunger crisis is the amount of food we waste. Roughly one-third of all food produced around the world is never eaten and ends up in landfills. The amount of food that is wasted each year, including organic waste like fruit, vegetables, meat, and dairy, could feed 2 billion people. America is one of the leaders in food waste and we hope that if you know the facts, you’ll be motivated to help make a change.

While America’s reputation as some of the world’s biggest eaters may be well-earned, the food that we don’t consume says as much about us as the food we do eat. Each year, Americans throw out roughly 53 million tons of food, including 27 million tons wasted in households. 77% of Americans say that they feel guilty about wasting food, but those feelings don’t seem to translate into action. Outside of overshopping and unnecessary purchases, some of the main drivers of food waste are sell by and expiry dates. While the dates on food packaging are often seen as helpful guides for keeping people safe from spoiled food, they are more often than not used to throw away food that is still perfectly edible.

How To Combat Food Waste

Learning how to properly decipher sell by and expiry dates is a great start to cutting down the amount of food you waste each year. Many items that are past their best before date are far from rotten and taste just as delicious as before the date listed. Another way to combat food waste is to use an organic waste disposal process to return your food to the earth. Bokashi fermentation is the fastest, most effective, and the least intrusive way to turn organic waste into productive soil nutrients. By recycling your leftover food, it can be turned back into healthy produce from your garden.

If you’re interested in beginning a Bokashi fermentation program at your home, check out the Bokashi Cycle online store today, or contact us for more details!